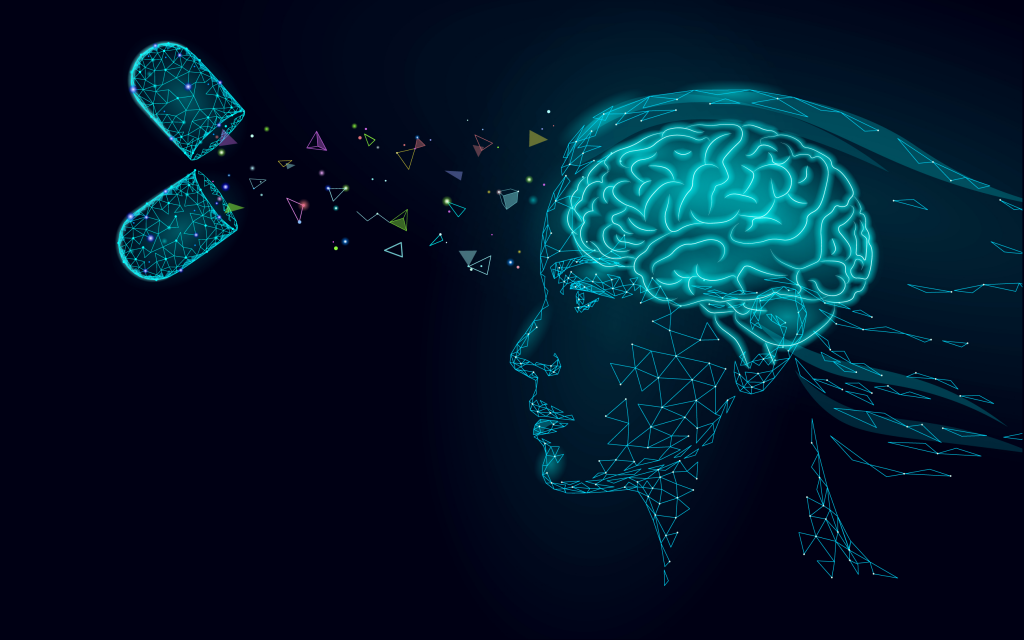 Since the dawn of time, people have used herbs to increase their cognitive abilities. Thousands of years ago, Chinese people prescribed ginkgo biloba and huperzine A to reduce memory loss and increase mental focus.

In India, bacopa has been used for centuries to stimulate the flow of blood in the brain and help maintain healthy thinking. And there are many other historical examples of this type about the use of nootropic grasses.

It is the Romanian doctor Corneliu Giurgea who for the first time introduced the term nootropics.

In 1964, one of the first pharmaceutical nootropics was developed: piracetam. It was originally intended to relieve dizziness and travel fatigue. Ten years later, we tested the piracetam to see if it could improve memory, which was the case.

Piracetam is still used, but today there are many other synthetic substances designed to improve cognitive functions.

Nootropics function as activators of the synthesis of neurotransmitters essential for the proper functioning of the brain. Nootopics allow better brain neurotransmission by boosting and regulating mainly:

The action of nootropes varies according to the type of substance used. The same goes for the duration of action which can go up to more than ten hours depending on the supplement consumed.

The compounds of some nootropics have positive effects on the blood circulation and oxygenation of brain cells. This helps to improve neurotransmissions that we have already discussed previously.

Indeed, the brain is made up of many neurotransmitters that encourage neurons to activate during the performance of specific tasks. However, with the many tasks that we must perform daily, the human brain may experience information management difficulties.

The brain is then limited, it is felt by difficulties of concentration and a drop in productivity beyond 90 minutes of work.

To counter these limits, the nootropes revive your brain activity by the action of acetylcholine which is the neurotransmitter responsible for memorization and concentration.

It is important to note here that nototropics are not drugs. Many of them do not require a medical prescription because they have natural components and it is very easy to find them in herbalists. Even so, before starting to use cognitive stimulants, it is always good to consult a specialist.

We must therefore know what we are looking for, because as we can see, the supply of nootropics is rather ample; everything indicates that it will be even more so in the coming years.

Modafinil is a psychostimulant used in the treatment of narcolepsy and hypersomnia. It allows people who suffer from unusual fatigue to stay awake while promoting alertness and concentration.

It is a drug prescribed under the names of Provigil in the United States, Modiodal in France, Alertec and Modasomil in Canada.

But all medicines that require a prescription are now available online, without prescription.

Thus the consumption of Modafinil out of medical prescription has exploded after the release of the film Limitless (without limits) in 2011.

This is the conclusion of researchers at Oxford and Harvard Universities, after a study on the intake of Modafinil by healthy individuals.

While recognizing that information on long-term effects is limited, its short-term benefits have been confirmed: Modafinil can increase attention, improve learning and memory, increase problem-solving skills, and foster creative thinking.

It has also been established that in a healthy individual, taking Modafinil makes performing a task more enjoyable.

The longer the task is complex and time consuming, the greater the positive impact of Modafinil on cognitive abilities.

Ginkgo biloba is a booster of natural mental performance. In traditional Chinese medicine (TCM), Ginkgo biloba extracts have long played an important role in their therapeutic virtues. This herb is more particularly known for its positive effects on the brain, which is said to improve memory and mental processes. Part of its action may be due to its ability to increase blood flow to the brain.

Ginkgo biloba can also help reduce stress levels when consumed before stressful tasks. It has been shown to lower blood pressure and cortisol, a kind of stress hormone. In other words, Ginkgo biloba can help you keep your cool so you can act better and react to stress. You can use shredded leaves of Ginkgo biloba to easily prepare a performance-enhancing tea. If you drink only two cups of Ginkgo biloba a day, it can significantly increase your energy level and make you feel more alert and energetic.

Although it is not recommended to smoke cigarettes, if you want to increase your mental performance, nicotine, the main ingredient of tobacco, is indeed another natural nootropic. Nicotine is actually so powerful that you have to use it with great caution, and only in extremely small doses. (One cigarette contains the equivalent of 1 mg of nicotine). In its pure form, nicotine is very toxic.

Nicotine acts directly on the mitochondrial energy, that is the energy that powers the cells of our body and our brain. The native tribes of Central America and South America have always known the stimulating effects of nicotine. They grow a particularly strong type of tobacco, the Aztec tobacco (Mapacho), which they consume during spiritual rituals and for healing purposes.

This website uses cookies to improve your experience while you navigate through the website. Out of these cookies, the cookies that are categorized as necessary are stored on your browser as they are essential for the working of basic functionalities of the website. We also use third-party cookies that help us analyze and understand how you use this website. These cookies will be stored in your browser only with your consent. You also have the option to opt-out of these cookies. But opting out of some of these cookies may have an effect on your browsing experience.
Necessary Always Enabled
Necessary cookies are absolutely essential for the website to function properly. This category only includes cookies that ensures basic functionalities and security features of the website. These cookies do not store any personal information.
Non-necessary
Any cookies that may not be particularly necessary for the website to function and is used specifically to collect user personal data via analytics, ads, other embedded contents are termed as non-necessary cookies. It is mandatory to procure user consent prior to running these cookies on your website.
SAVE & ACCEPT